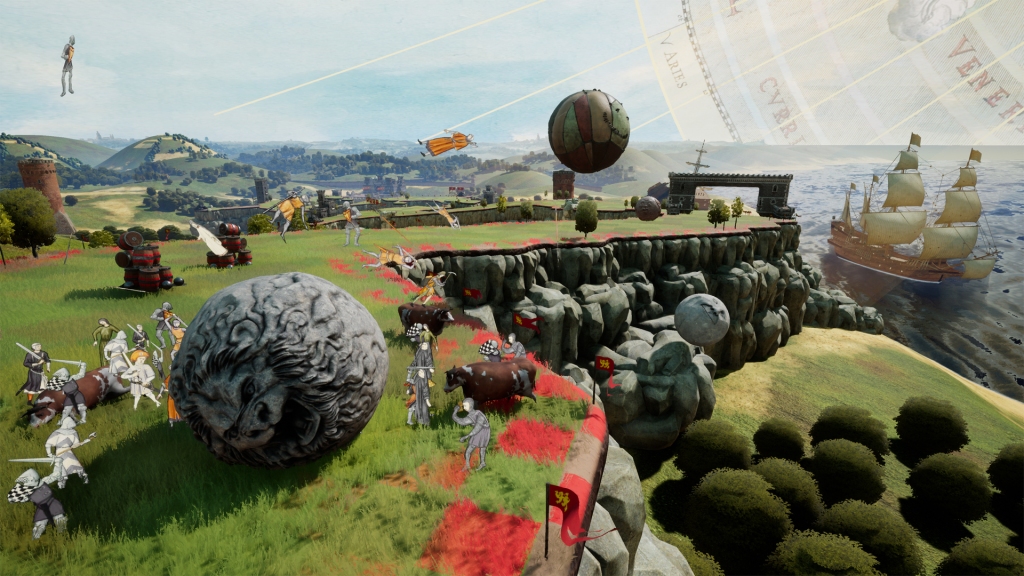 Rock of Ages 2, is probably the funniest game on Switch, the cut-scenes are laugh out loud hilarious. Before the start of each level in the main campaign, you are greeted to a very Monty Python-esque cut-scene featuring the historical figure for that area. These historical figures include Joan of Arc, Van Gogh & Don Quixote, amongst others.

Out of all these, our favourite is a close toss up between the Garden of Eden & The Scream. They are so inventive and clever, you can tell that lots of passion and pride went into making them. If you are after a game to make you laugh, Rock of Ages 2 will seriously not disappoint.

The main story campaign takes you on a World tour of Europe and Northern Africa visiting various different cities. If nothing else, the history lesson is also quite fun.

Each city level has two elements. The main part is ‘War’. In this mode, you do one of two things. Either, you control your boulder as you race down the course towards the enemy castle. Or you build defences in order to try and stop the opponent’s boulder. Simple.

The concept of this mode is fairly easy to grasp, although you may realise that on some levels you might be best simply trying to destroy the opponent’s castle door quickly, rather than focus too much time on building defences.

The other mode in the campaign is ‘Obstacle Course’. This mode simply puts you in a race against the other boulder from that level, whilst trying not to hit the obstacles and fall of the track. (Each level has its own boulder that you unlock once you’ve beaten the ‘War’ mode.) Some of these were a little frustrating until we discovered the Sand Boulder, which is as smooth as boulders bottom and glides down the track.

“There’s also something quite memorising about watching your boulder roll down the hill, smashing through walls.”

The final boss battle in this game has got to one of the most entertaining and unique boss battles we’ve ever done. It is simply brilliant! We won’t reveal any secrets about these bosses, but they are well thought out and each boss battle is quite different from the last.

Outside of the main campaign, you can play any of the game modes locally either against AI or against your mortal enemy on the couch. These include the two modes mentioned above, and a Time Trial mode. This is the same as the ‘Obstacle Course’ but without the obstacles. Simply a timed race to the castle.

The game also features online capabilities, unfortunately, all the times we tried it we couldn’t find any available matches, but perhaps you’ll have more luck. It isn’t an essential part of the game, however, so it isn’t that much of a problem.

As you progress through the story, you will unlock both additional boulders and defences. Each boulder has slightly different properties which makes it more or less suited to certain levels, but it also a matter of personal preference. Some boulders leave marks on the map where defences can’t be placed, others are more durable to attacks, whilst of them will allow you to jump twice.

Our favourite is the flaming boulder which does extra damage as well as looking cool.

There is also quite an eclectic set of options defensively. From sticky cows to raging bulls, to canons & ballistic weapons. There is something for everyone, you’ll have lots of fun testing out different combinations

For sheer entertainment value, this has got to be one of our favourite Nintendo Switch games out there. Granted the game isn’t very complex or long, however, not many games can bring as much absolute joy and laughter as this one does. If you’re a Monty-Python fan or a fan of that type of comedy, you will love this one. There’s also something quite memorising about watching your boulder roll down the hill, smashing through walls. A very enjoyable game all around, we highly recommend it.