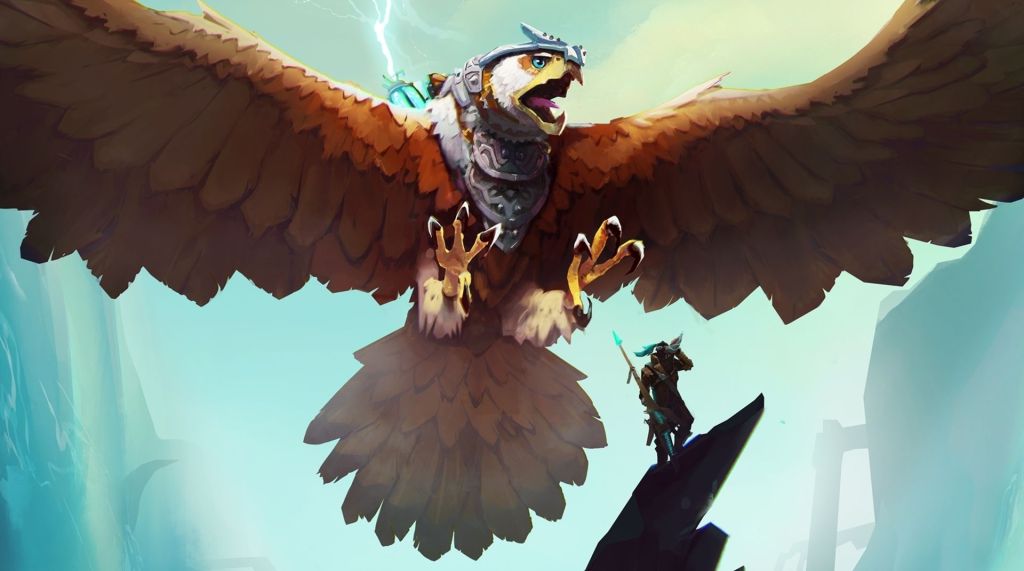 Birds on the brain

The advent of open-world games has led to some fascinating ways of thinking about space. We’ve all heard the usual refrain of climbing every mountain you see, and the promise of fully-rendered toy boxes that we can explore to our heart’s content has been the promise of many massive Triple-A games. Here is the world, these games say; go and discover it. For some games, sprawling land ends up bringing diminishing returns, as players stumble around on foot doing not much of anything at all. The Falconeer: Warrior Edition, out now for Nintendo Switch, PS4/5, and Xbox Series X/S, has that same exploratory spirit, with the good sense to restrain its map, and the memorable hook of exploring the whole thing on the back of a giant bird. So how does it measure up? Well, as obvious as it might be to joke about a game about giant birds flying too close to the sun, The Falconeer might have actually benefited from soaring a little higher and taking a few more risks.

The first thing you’ll likely notice about The Falconeer is that it is extremely nice to look at. Soaring over horizons and through clouds while sunlight plays on the surface of the water or cutting through a storm cloud under an ominous moon, you always feel like you’re flying through a decadent oil painting. With excellent color choices and uses of light and shadow, every image of The Falconeer feels epic in the old English poetry sense of the word. The lone bits of land that float above the water are full of intricate design and detail, as you fly around the isolated land masses that are scattered throughout the great ocean.

Even better than its sterling visuals, the world and setting of The Falconeer is easily its strongest aspect: a compelling mash-up of WWI-era England and the golden age of pirates, with steampunk zeppelins and giant birds criss-crossing the skies. Different factions battle for power in a richly-detailed story dripping with lore and heady high concepts. Lone developer Tomas Sala clearly knows this fantasy world like he grew up there himself, and the sheer depth of thought put into this world is a blast to uncover across the game’s cutscenes. The music also helps sell the pathos and fantasy of the setting, with some wonderful pulse-pounding arrangements that always keep the excitement up.

“The Falconeer might have been a singularly unique action game, the kind of sprawling fantasy epic often imagined by teenagers but never actually written, full of unbridled imagination and rewarding exploration.”

However, as pretty as the game looks, and as intriguing as its setting might be, neither of these elements necessarily translate into a fun gameplay experience. The world is full of ideas, but it isn’t necessarily full of things to do. You only ever land at brief lookout points to receive more missions, meaning you can only ever appreciate the unique land masses from afar — which is as much fun as looking at toys without taking them out of the packaging. As a consequence, the open world that feels so lively and complex from a narrative perspective feels flat and lifeless from a gameplay one. You’ll fly around other characters who can give you side missions, but they never feel like people in the world — just more boxes to check off, and more tiny objects floating on the game’s endless ocean. As pretty as that ocean is, soaring over it loses its luster before too long.

Soaring around the game’s maps gets familiar quickly, and after it gets familiar — dogfight, escort mission, courier mission, dogfight, repeat — it gets a bit stale. There are a large number of new missions to take on, even more than the game’s original release due to the included Warrior DLC, but they don’t feel new or distinct. Flying your majestic warbirds is a likewise strangely sedate endeavor — rolling into a dive or holding down the dash button never feels as kinetic or responsive as it really feels like it should. Firefights with other winged enemies lack a sense of excitement or immediacy, even when in climactic missions. The whole enterprise just can’t seem to get out of second gear — nothing quite feels as connected and responsive as it should.
That’s not to say The Falconeer is outright bad at all, because it isn’t. The game is competently made, in addition to being visually polished, and fans of aerial combat games with a distinct fantasy flavor will likely be amused for a little while. There’s just an unshakeable sense that this game could have been, and done, so much more — and instead, it plays like the filler farming missions from a larger-scale, more ambitious title. The developer is certainly one to watch though, and if nothing else, The Falconeer: Warrior Edition makes me excited for what might come next. With a few risks and a little more willingness to lean into the parts of the game that could be truly weird and wonderful, The Falconeer might have been a singularly unique action game, the kind of sprawling fantasy epic often imagined by teenagers but never actually written, full of unbridled imagination and rewarding exploration. As it stands now, it’s just fairly interesting, and even then only to those who were already sold on its premise.