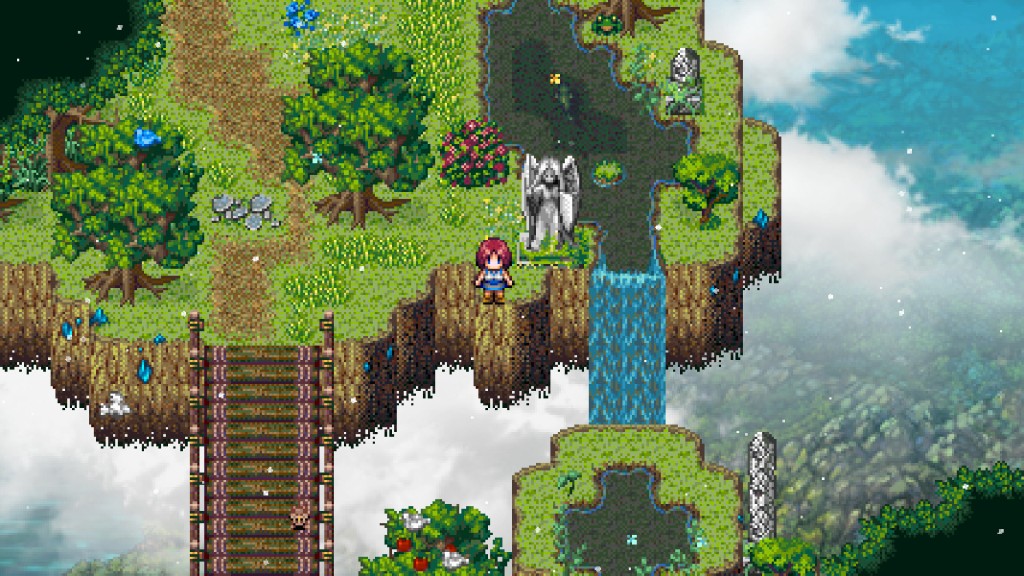 ‘Ara Fell: Enhanced Edition’ has arrived on the Nintendo Switch. Originally released on PC and now repackaged with extra features, Stegosoft’s 16-bit offering is a welcome throwback to the early days of JRPG gaming.

The storyline should be familiar to lovers of the genre; take two young heroes on a quest to find a magic ring hidden in a labyrinthine world of tombs and watch as the story unfolds through twists, turns, new friends and long-forgotten lore. It is a structure in keeping with the nostalgic ambience of ‘Ara Fell’.

As previously mentioned, the game utilises a classic 16-bit graphical style that is somehow able to marry a retro presentation with a thoroughly modern feel. The artistry is excellent and ranks among the best I have played on Switch, which is high praise given the saturation of titles using the format. The colours are vibrant, the scenery is engaging and the battle animations are exactly what you would expect. I should make it clear that the majority of my playtime was spent in handheld mode, and though the graphics are still great when docked, it does lose some of its charm; ‘Ara Fell’ was definitely intended for the small screen.

Supplementing the graphics is a soundtrack of real quality. Not the SNES style score I expected, but music that would not be out of place in a game with modern stylings. Striking the perfect balance between kitschy JRPG and integral accompaniment to the action, the soundtrack of ‘Ara Fell’ is worth a listen on its own even if you don’t buy the game itself. In much the same way as the game foists nostalgia on the player through its look, the sound achieves the same whilst retaining an ever present reminder that it is 2020, not 1992.

When it comes to gameplay Ara Fell doesn’t add much new to the genre. Navigate across a large map completing both mainline and side quests and complete battles to level up your party and unlock new abilities. Ara Fell offers a surprising amount of exploration, though at times the guidance is lacking; if you were only half-paying attention to the conversations then you are likely to get lost quickly. I generally don’t mind wandering aimlessly through a game, particularly not one that looks as good as this one (especially whilst we’re unable to wander aimlessly in the real world), but if you’re not in the right frame of mind to retrace your steps multiple times then perhaps leave this one until you are. To compensate for this, Stegosoft have included a teleport ability so that should you get lost or forget your objective you can easily return to a previous location; you’ll have to walk around again but hopefully with a clearer idea of where you’re going.

In terms of battle mechanics, ‘Ara Fell’ doesn’t offer anything revolutionary. Before each encounter your party will line up and then take turns to attack. Repeat the process until the enemy’s health is entirely depleted, gain your experience and move on. As with all JRPGs, this process does require some strategic thinking as you progress generally and during boss battles. Unlike some of the classic titles like ‘EarthBound’ and the ‘Fire Emblem’ series your party is completely healed automatically after each battle which, though time saving, does lessen the need to think strategically; if there’s no severe consequence for reckless tactics then you end up going gung-ho at every possible opportunity.

During battle you will also use weapons, potions and other items collected along the way, as well as those you can make using the intuitive crafting system. The crafting mechanic is simple, effective and a welcome addition to the gameplay.

Overall, ‘Ara Fell’ doesn’t do anything too unique. Then again, it isn’t trying to. What it is is a throwback to the early days of JRPGs where engaging story and character development ruled supreme, and when whether you chose to spend your time exploring, grinding in battle or just chatting to NPCs the experience was one sure to keep you coming back for more. ‘Ara Fell’ does the simple things very well and the additions to the tried and tested formula enhance the gameplay. It looks and sounds fantastic and should be a welcome addition to any fan’s library. Though its appearance is lessened when docked and many will find the sheer size of the world overwhelming at times if, like me, you spent happy hours lost in these fantastical worlds in years gone by, then you can do lot worse than picking this one up.